I'm Spooky and I Know It! 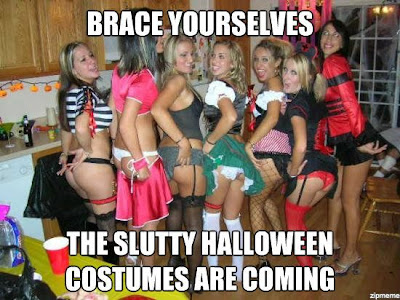 One Halloween I had the PRETTIEST PRINCESS DRESS EVAH. There was a cold snap, and I still remember the crushing humiliation of having to wear my red puffy down filled coat over my costume.

It went on like this for a bit until finally I came up with the answer: "A TOMATO FAIRY" and it got me extra chocolate... and that, my friends, is when I decided WITTY BEATS PRETTY anyday.

In college, the trend in costumes was SEXY. My friends were Sexy witches, Sexy nurses, Sexy football players...there was not a costume existed that they couldn't shorten, rip, hoist and totally Slutify in some amazing way. As for me, Freshman and Sophomore years, I wore my old Burger King uniform.

(Why, yes, whilst in college I did work at that fine establishment.. I microwaved patties for about 6 months. I always hoped they would promote me to the register, but sadly it was not to be: I was fired for lack of burger wrapping skills. I could never figure out how to neatly fold that paper tissue so it wouldn't unwrap. I got into an argument with management about my suggestion for utilizing scotch tape in the process. It ended badly. I can't look at oragami to this day. But I digress...)

The point is: I found the wearing of a brown corduroy pantsuit (yes, that's what it used to be back in the day. With a spiffy plastic visor in coral) to be IRONIC. And MEN STILL DATED ME, just for the record. It's not like I was the ugly girl in the Burger King costume at the party--I was making out with total strangers Just Like Everyone Else. MAYBE EVEN MORE SO; when the guys realized the mileage they could get out of lines like " Do You Really Hold The Pickle?"

But Junior year, my roommate suggested lending me a killer harem girl costume that was basically a bra and a pair of silk Hammer-time pants. And the bra was totally Bedazzled so it was a Bra of 1000 Diamonds. It was like Super Sexy I Dream of Genie. I could not resist.

Later that night, when the temperature dipped below 40 and I had to walk a mile from the Pub back to my dorm, I longed for nothing more than the Halloween of my youth and my red puffy down filled coat. I still believe witty beats pretty, but more than that: Warmth beats Freezing Your Ass off anyday.